Travelling to the snow festival can be an expensive activity; packages deals have a premium, many schools want to join in on the powdery fun. It doesn't have to be expensive, if you have the time and resources.

If you say, happen to be not busy at 9:30am JST (Japan Standard Time) 2 months before you want to fly, you may be one of the lucky few to get a super discounted ticket via SKYMARK (That is also if you have a decent internet connection, servers seem to be quite congested at this stage). Although I was not super lucky, I did manage to get a more than reasonable price of tickets, under 20,000 yen return! http://www.skymark.co.jp/en/

This trip also gave me an opportunity to visit my good Japanese friend Sacchan (Sasaki Yuko) from Youjyou Seminar (The floating university) way back in 2006, who is now working in Sapporo.

After an 'alarm malfunction' I woke up at 6:45 before my 08:00am flight. Thanks to my friends work alarm, and a kindly Japanese lady on the train, I was able to make it with 15 minutes to spare, and still check in my baggage ( I in no way encourage people to turn up 15 minutes before a domestic flight from Kobe Airport). As you can imagine, the grin of relief on my face was ear to ear. It had never ever crossed my mind that I may miss a flight (through fault of my own) before this trip.

After a smooth flight seated next to a nice Australian family, I headed straight to the 'white liner' desk, where I was put onto the next available service, 10:40 (although I was booked for 11:40).

I found this company while searching online, they have a 20% discount for return bookings made 3 days prior to the departure date, and also allowed me to book a 'return' ticket for New Chitose Airport > Hirafu > Sapporo JR Nikko Tower Hotel. Although the website says that there must be 6 passengers booked for the shuttle to go ahead, there were a total of 4 pax on my bus, and it still went ahead. A whole coach for 4 passengers, travelling in reclined comfort. Bliss! 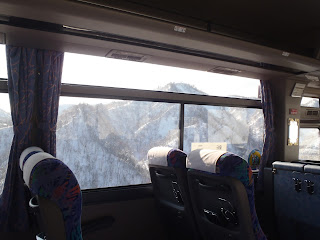 On my arrival at the Hirafu Welcome Centre, I was given directions to my little hostel, Niseko Yubokumin (Niseko Nomad). It was fairly simple to find, as Niseko is based on a grid system. Just a short walk down the icey road. Snow was piled high everywhere.

The owners of Yubokumin are a lovely Japanese couple, who make every effort to make your trip a success. The rooms are simple, but very comfortable and you are able to order a Japanese style breakfast and dinner, which are eaten in the common room upstairs. 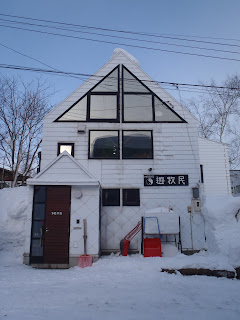 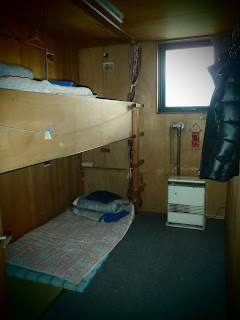 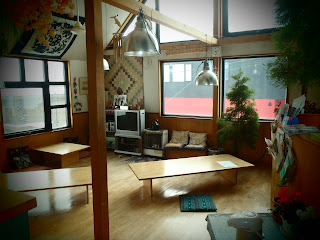 I was offered skiing lessons at 2000 yen per hour, and ski boot, ski and stock rental for 1000yen per day. Although the equipment was a little old, my lack of skill meant this made no difference to me.

I used my afternoon to get my bearings, pick up some groceries and sort out arrangements for the next 2 days skiing. Being a unexperienced skiier, I decided to buy a 2 day Hirafu pass. You can also buy an all mountain pass, which gives you access to the Annupuri and Niseko Village lifts as well.

Later, I head off to the Irish pub, in search of other people to socialise and ski with. After sitting down for a while with my Irish coffee, a bunch of people from the Frunkfurt Ski Club, joined me and we had many drinks that lasted well into the night. Tamashii Bar was on the list of pubs visited, but Wednesday dart night made it virtually impossible to get a drink, so next we frequented Barunba and then (my favourite of the night) The 'fridge' bar. The door was literally a fridge door, but inside was a spacious bar with a great atmosphere. The night ended at a reasonable hour and I walked through fresh crunchy snow to Yubokumin. 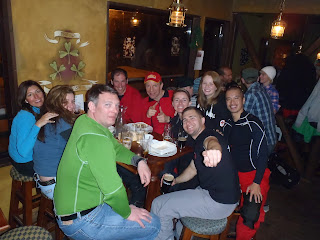 As I set of skiing (starting from the family lift) It was good to see that I wasn't completely useless. After a few practice runs, I set off to conquer the green runs of Grand Hirafu. I stopped for lunch on the middle of the hill before finally getting in touch with my new friends. They were at the other side of Hirafu, Hanazono 308 restaurant. For most people it would have taken 30 mins tops to make it... for me after much sweat and almost tears, I arrived an hour later to see the boys finish their 'beer tower' 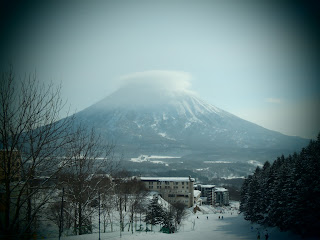 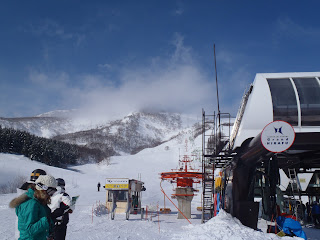 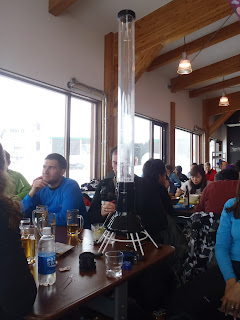 For some reason, I always seem to loose my skiing confidence after lunch, so the run I completed in the afternoon, coupled with the complete white out, was lets say, less than impressive.

The second evening, I met up once again with the Frankfurt Ski club and we headed out for a nice dinner. The Vale, Bar and Grill is located at the base of the Ace Family Lift. The food was reasonably priced, and had good servings. I had the Salmon and Nori Roulades, and the mushroom risotto for main, and was completely stuff! Yum!