Gero Onsen is a Hot spring resort in the middle of Gifu Prefecture. It is one of the top 3 hot spring resorts named in the Edo Period. I had been craving for a while to head to Gifu prefecture and see the Gassho Housing (thatched roved houses) so this was the perfect chance.

A lovely woman called Yumi (who it turns out also studied at Murdoch University, small world!) along with the wacky and wonderful Julian, whom I had not yet met, organised this trip. I happened to hear about it via the Hyogo AJET mailing list. Very lucky for me! A mere 25,000yen got each participant bus fare, boat cruise and accommodation (including dinner and breakfast).

We left from Himeji Station at 8am, moving along the highway unfortunately took a little longer than expected due to the weekend traffic. So we decided to move the boat cruise to the next day. The bus driver pulled into a random little spot where we were able to enjoy a small shrine surrounded by trees starting to showing their Autumn colours (momiji). After a short stop we were on the road again to Gero. Entertainment in the form of a collection competition and 'guess the song' team quiz had us laughing all the way. 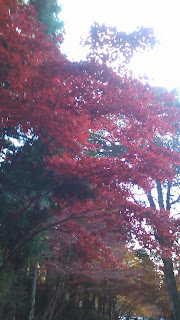 Most accommodation in Gero Onsen has their own hot spring bath set up. Our hotel, Kankou Hotel Yumotokan, also had its own, but given the cheap price of our package, It wasn't quite as glamourous as some of the other onsens on offer. In saying this, we had lovely big rooms, with 2 tatami rooms and western style sitting areas in which we enjoyed the lovely complementary manjyu Japanese sweets, and tea. 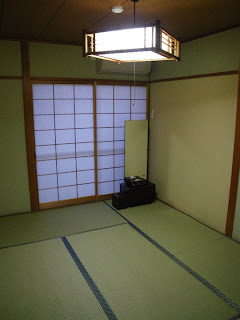 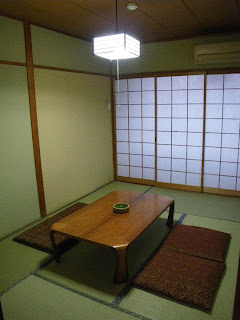 Before dinner we decided to have a look around, and go for a bath. Donning our hotel yukatas, we quickly purchased the 1200 yen 3 onsen pass from the hotel front desk (available from all hotels, convinience stores and information centre in Gero Onsen), and set out. As dinner was to be served at 8, we didn'd have too much time, and could only fit in 1 onsen. Sasara Onsen was the choice of the day. This onsen had a lovely outdoor bath that overlooked the town below and river, a lovely lounge and changing area and great products for guests to use. There was also a small bath infused with nice smelly things (something like bathing in herbal tea). We had a lovely long soak before heading back to the hotel for dinner.
Our dinner was an enkai style (Japanese banquet style) feast. We were very well provided for, and ate ourselves silly.
After dinner, we headed up to Onsenji Temple to have a look at the Momiji Illumination. It was very very pretty, but also very cold. Photos just don't do it justice. Time, to defrost! Off to the public hotspring! 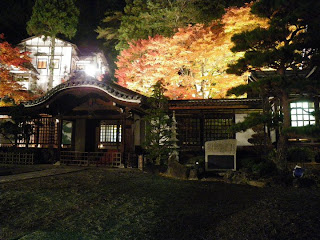 One of the famous features of Gero Onsen is its public hot spring. Right next to the river, this onsen is open air (called rotenburo) and has no facilities for changing or toilets, it is also meant to be enjoyed wearing bathing suits. Two of our group members that had arrived previously had not realised they were allowed to wear bathers, as everyone that was there was in the nick. This made for some light entertainment as the 20 something group of foreigners stripped down to their bathers and jumped in, next to the naked people. Even some Japanese women entered wearing only towels. Needless to say, I didn't get any snaps of this one. We enjoyed the warmth of the bath for around an hour before heading back for more bathing at the hotel, drinks and social time.
The next day, after breakfast and a lazy start, we head out to to the markets and the Gassho Village. The Gassho houses are the thatched roved houses that were built to withstand and shed the massive amounts of snow that are typically experienced in the region. 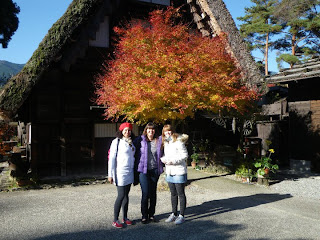 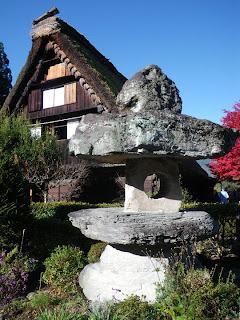 After visiting the Gassho village, me and another group member tried to get another onsen in. However, most of the onsens in the area are closed between the hours of 10 and 2... So we ended up at the only onsen open at that time, Shirasagi no Yu. It was still nice, but not fancy, and didn't provide soap or shampoo.
At 12:30 we all piled on the bus and head towards our boat tour in Ena Valley. http://plaza.rakuten.co.jp/machi21english/diary/201011110000/
As we had made a group booking, we were ushered through the long line of people that were waiting. Another pleasant surprise; we were put on a Japanese style cruise boat with tatami mates and open to the air. The tour made a circuit of the river to look at the interesting rock formations while we relaxed and reclined. 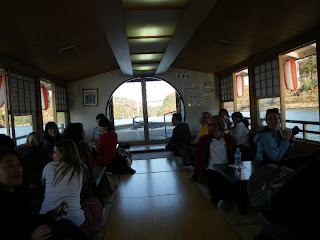 After a returning we had a little leisure time shopping, we all hopped on the bus to make our way back to Himeji. Once again the traffic caused some issues. Thankfully we weren't driving so we could all snooze away.
Before this trip, I must say I was a little apprehensive given I didn't know any of the tour members. However, as I approached the group at Himeji Station on the first day, Julian and Yumi said they had already decided I must be 'cool' as I had gone out on a limb and joined the tour. Thank you everyone for making me feel so welcome. I had a fantastic time and look forward to more trips together in the future.
For modesty at the outdoor hot spring: Wear the yukata that your hotel provides you with. You will be able to change out of your wet bathers underneath your yukata with relative discreteness.
Big thanks to Lauren McRae for providing most of the photos shown :)
Posted by Oh Japan... and other travels at 20:04 No comments:

In November, 2010, I was invited by my good friend Jon to join the Wakayama JET contingent on a weekend tour of Mt Koya (Koyasan), the home of Shingon Buddhism which was introduced to Japan by Kobo Daishi.

http://www.japan-guide.com/e/e4900.html
We stayed at Rengejo-in, a working monastery that also offers lodging for travellers (called Shukubo). There are over 50 Shukubo in Koyasan, but I'm pretty sure we stayed at the best. 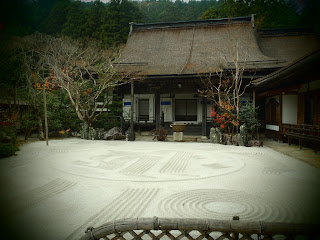 During our stay we were invited to join in the morning and evening meditations, and enjoyed traditional Buddhist vegetarian dinner and breakfast. Dinner was one of the best experiences I have had in Japan. The widow of the former temple head joined us in our meal to tell us her story of learning English in preWWII Japan, and the reactions of people in postWWII Japan. Please go for yourself to find out. To hear the 'other-side' of the story, was certainly a special experience for me.

Prior to this we toured the area and visited some of the main temples in the district, including Kongobuji Temple and Garan. The Autumn leaves were particularly beautiful up here, especially as we didn't have to fight the hoards of people that we would have encountered, had we been in Kyoto. 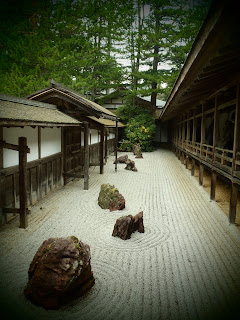 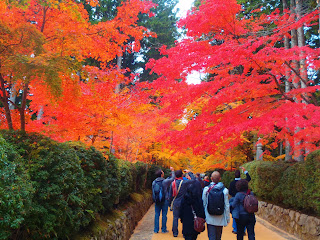 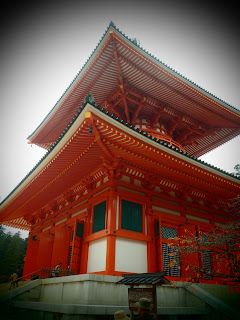 The second day we explored Okunoin Temple and Cemetary grounds. In a bid to remain close to Kobo Daishi in death, many people, including feudal lords, had their tombstones placed here. Come here on a foggy day, and you will be surrounded by haunting beauty. Many of the tombs' age are unable to be determined. Mount Koya was designated as a UNESCO world heritage site in 2004. 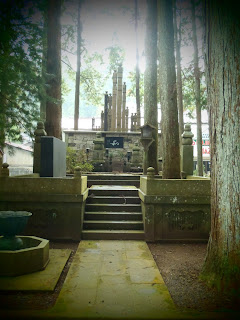 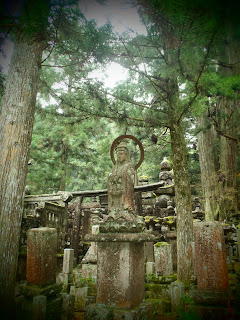 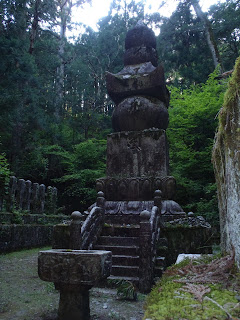 This trip was made all the more special for me, as I was able to travel with my friends Jon, Luc, Brodie and Amanda. It was also Jon's birthday, so we brought along a cake just for him. Happy Birthday Jon!
Extra Koya-san information
Posted by Oh Japan... and other travels at 13:08 No comments: