In April, when the snow has melted away, there is one place you can count on for a mountain of snow. The Northern Japanese alps are the steepest and considered by some to be the most beautiful in Japan. The route, at its highest point has an altitude of 2500 metres. The route can be accessed from Tateyama in the north and Ougizawa station in Nagano Prefecture.
Tateyama Kurobe Alpine Route lies upon the boarder of Nagano and Toyama prefectures. For any that get a thrill out of tunnels, this is the perfect trip for you. The electronic trolley bus will take you through the tunnel, the thickest point of which took over a year to cut through. No less than 9 modes of transport will take you the length of the Alpine Route, including the cable car, electric trolley bus, and ropeway.
Throughout the open season (spring,summer and autumn) you might be lucky enough to see the nationally protected bird, the snow grouse, which has reportedly existed since the ice age. Its feathers change colour with the seasons. Martens also roam the region, so you may be lucky and spot these cute ferret like creatures.
The highlight of my trip to the Alpen Route last year was the Snow Walls, which are 18 metres tall at their highest. Take a stroll down along the snow walls, but don't forget to rug up, its pretty icy up here! 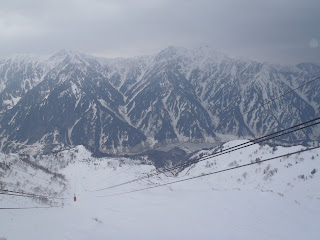 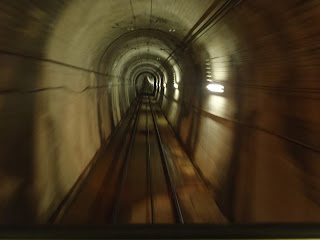 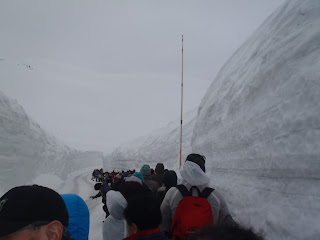 You can even see snow in Mordor! Ehem… sorry I mean Murodo. Murodo is the highest point of the Alpen route. In the spring season it is covered in snow, and you can walk out to the lake and hot spring across the snow too, just make sure you bring non-slip shoes. Murodo also boasts the earliest Autumn Colours in Japan, which start to turn in late September. And not unlike the inhospitable terrain of Mordor, Murodo has it's very own Jigoku-dani (Hell Valley) where you can witness the gas and and hot water spewing from the ground.
Winter sports can be enjoyed up here earlier than the rest of Japan, as Mt Tateyama is completely covered by snow in November.
During the summer months, you can enjoy hiking and mountain climbing, and also enjoy a cruise in a ‘pleasure-boat’ across the waters of the Kurobe Dam. Walk along the walls of the dam, and you are looking at one of the largest dams in the world. Water is discharged from the dam from late June, and you can often see rainbows in the mist.
As impressive as the Alpine route is, I recommend not neglecting the surrounding areas! If you should decide to pay a visit in Golden Week, you can also enjoy the Tonami Tulip festival. Fields upon fields of tulips of many shapes and colours (including black) and even tulip flavoured icecream (tulips taste like musk apparently!) Get your photo taken with the Tulip Princesses, and mascots. The park smells devine, and you can easily loose hours walking through the different exhibits of not only more than 450 kinds of Tulips, but local produce. Try the black pork, it’s delicious! Tonami Tulip Fair is a 15 minute walk from JR Tonami Station. 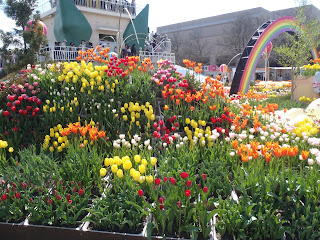 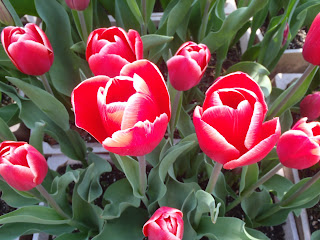 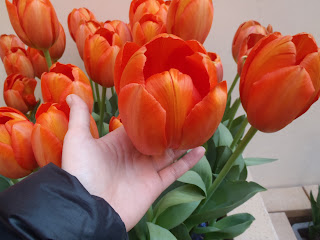 On the eastern side of the Route, you aren't far from Matsumoto castle. On the western side lies the famous Takayama in Gifu prefecture, and the much loved 'little Kyoto', Kanazawa, perfect stops for a tour of the region.
So, since one does not simply walk into Murodo, (at the very least you will have to take the cable car and Highland bus from Tateyama station) how does one get there? The Thunderbird Express will get you to Toyama from Osaka Station (from 8000 yen, unreserved seat), and then take the local train from Toyama station to Tateyama (60 minutes @ 1170yen pp). 10,490 yen will get you to Kurobe Dam for a day return ticket, or you can pay for the legs of the trip as you go. Hotel Tateyama (in Murodo) is the highest mountain hotel in Japan, so it's a great option to take your time to explore. Should you come out the other side (in Nagano) you can take the Train from Shinano Omachi to Osaka using the local train, Wide View Shinano and Hikari Shinkansen for 10,540 yen (taking just over 5 hours). By Car, it takes roughly 6 hrs to both Toyama and Shinano Omachi Station, and plenty of parking is available at both ends of the Alpen Route.
So why not head over to this beautiful and often neglected area of Japan? Rich in history, nature and transport technology, its well worth the trip.
To see further details of the Alpen Route prices, check out http://www.alpen-route.com/cn/Access/img/pdf02.pdf
Posted by Oh Japan... and other travels at 14:05